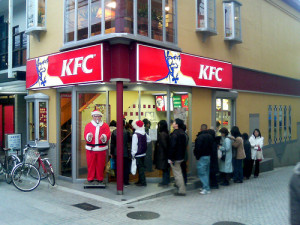 Is that true that Japanese people eat KFC on Christmas eve?

Yes KFC is definitely very popular especially during Christmas season in Japan. I had never really thought of this as KFC used to be a part of my childhood Christmas traditions.

I had never thought of the reason why KFC is so popular during Christmas back home but the only thing that comes into my mind is the famous commercial.

Christmas is all about fried chicken!

We can’t talk about KFC without this super popular commercial. It all goes back to mid 70s, when KFC began its huge campaign that turned out to be a huge hit.

TV commercial repeatedly played the commercial with the Christmas is KFC song and Japanese people naturally think of KFC during Christmas because of this very successful TV commercial and campaign.

Most Japanese people are non-religious so I think that’s one of the reasons why KFC campaign has worked so well in Japan. Christmas is actually considered the most romantic holiday in Japan and for families, it’s all about KFC!!

How do you celebrate Christmas in your country? Leave your comments below!