I am excited to hear about this news..! I love Chibimaruko chan series, in fact, any Japanese person who grew up in 90s would know what Chibimaruko chan is. Last year, author of Chibimarukochan died of cancer but for some reason, it was never made a screen debut. This is based on 1995, “Chibimaruko chan and halloween” episode and a new production team actually polished the original one and Sakura Momoko (author)’s spirit is finally brought back to her origin-ribbon manga magazine.

I am so excited and can’t wait to read this colored 23 page of New Chibimaruko chan in Ribon magazine! Reporter said that it may not be regularly but the team plans to create an episode for Chibimaruko chan irregularly.

I love Chibimaruko chan’s world. So many unique characters and I couldn’t stop laughing when I was reading her comic book but obviously it’s loosely based on the author’s hour. 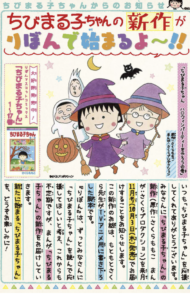