I know..I am a little behind on this but today I want to talk about Japan’s new era which is “Reiwa” which marks the beginning of the new era in Japan.

What does “Reiwa” mean? 令和

Apparently this is from “Manyoshu” which is Japan’s oldest Wakashu. Until now, the era has been cited from Chinese classics but in 2019, we should pay more attention to the Japanese classical literature such as Manyoshu!

So who came up with this “Reiwa” era? Apparently that’s private, thus we will never know.. ok.

We are all guessing that the previous era (Heisei meant “peace”) + Wa from Reiwa = Heiwa which means “Peace” so that’s the continued theme of present and future Japan. 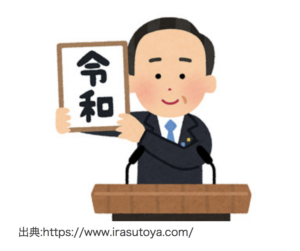 Reiwa characters are taken from a stanza in a poem about plum blussoms that appear in Manyoshu, the oldest existing collection of Japanese poetry, compiled sometimes after 759.

Placed in that literally context, the Kanji can be read to mean “fortunate” or “auspicious” and “peace” or “harmony”

Reiwa is an portmanteau of rei, meaning “good” or “beautiful” and wa, meaning “peace or harmony”

The current era is called Heisei, or achieving peace. The era ended on April 30, 2019 and Emperor Akihito abdicated the throne and his son Naruhito became the new emperor on the first day of new era.