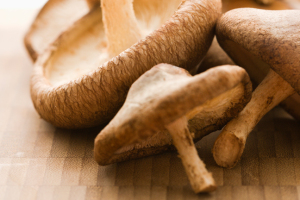 I do like Shiitake. I normally don’t like Mushrooms because it isn’t really something we should be eating..at least that’s how I feel whenever I have mushroom soup, mushroom something..but I like Shiitake. It tastes a bit sweeter than other types of mushrooms and we use shiitake for many Japanese dishes. My favorite is

Chawanmushi is my favorite Japanese fish that comes with Shiitake. My mom used to make this often, and it looks like “pudding” but not sweet. You just have to try it! 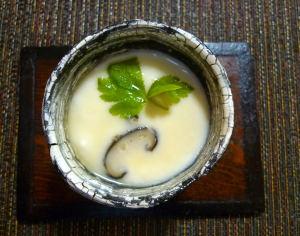 I didn’t know this but cancer.org states the compounds found in Shiitake have significant health benefits and based on the animal studies, it helped delay or even prevent the development and the prognosis of cancer and the AIDS.

“A shiitake mushroom is an edible fungus native to Asia and grown in forests. Shiitake mushrooms are the second most commonly cultivated edible mushrooms in the world. Extracts from the mushroom, and sometimes the whole dried mushroom, are used in herbal remedies.” (cancer.org)

Apparently, the studies conducted in animals show that Shiitake has positive effects on “antitumor, cholesterol-lowering, and virus inhibiting effects.

But how does Shiitake actually work to fight the cancer and even AIDS?

Compounds (Lentinan) found in Shiitake help fight the development and the prognosis of AIDS.

“Animal studies have shown some positive results regarding the anititumor, cholesterol-lowering, and virus-inhibiting effects of several active compounds in shiitake mushrooms. There have been some studies in humans. At least one randomized clinical trial of lentinan has shown it to prolong life of patients with advanced and recurrent stomach and colorectal cancer who were also given chemotherapy. Kentinan is a beta glucan (sometimes called beta glycan) that is found in several mushrooms, yeasts, and other foods. Beta glucan is a polysaccharide, a large and complex molecule made up of smaller sugar molecules. The beta glucan polysaccharide is believed to stimulate the immune system and activate certain cells and proteins that attack cancer, including macrophages, T-Cells and natural killer cells. In laboratory studies, beta glucan appears to slow the growth of cancer in some cell cultures. Several potential cancer-fighting substances have been found in shiitake mushrooms, and purified forms of these compounds are being studied as treatment for stomach and colorectal cancer. It is not know whether any of these results will apply to the mushrooms bought in supermarkets or the extracts that are sold as supplements.” (cancer.org)

“Results from two small studies of HIV-positive patients who were administered intravenous lentinan showed a statistically insignificant increase in CD4 cells and neutrophil activity in some patients; researchers also reported severe adverse effects in some patients. But improvements in quality of life and survival were seen with an oral formulation of superfine dispersed lentinan in patients with hepatocellular carcinoma, gastric, colorectal, and pancreatic cancers.” (mskcc.org)