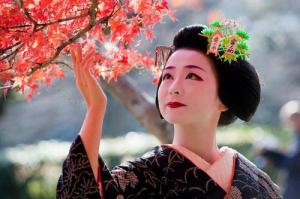 The Amazing Story of the Japanese Geisha

You decided to finally purchase that favorite Asian collectible at last! You chose the Japanese Geisha figure first because she is so beautiful. You are definitely not alone in your decision. Now that you see the elegant Japanese kimono doll displayed on your shelf at home, or in your office, what can help you appreciate her unique symbolism more fully?

It has been well said that “geisha’ are professional hostesses who entertain customers through a variety of performing Japanese arts. In the Japanese language the word “gei” literally means “art of performance.” The word “sha” means “person.” A rough (and probably somewhat simple)translation into English for “geisha” might be a “female performing artist serving as a hostess.”

From their earliest history in Japan, the Geisha performing artist had to patiently endure thorough training in order to acquire her title. The best Geisha had to continue to improve upon her skills over a lifetime by taking many lessons. Sadly, some aspects of the Geisha lifestyle were not glamorous at all. For instance, until the middle of the twentieth century many young Japanese girls were sold into the Geisha profession by their own families! These girls, when reaching the appropriate age, would then become subject to the ritual of the “mizu-age.” This ritual is essentially the selling of the young woman’s virginity to the highest bidder. This practice was done away with following World War II.

The elegant Japanese Geisha of the past lived in a world most people today barely understand. Basically, there were two types of geisha..then and now. One type is called “tachikata.” This type of geisha generally dances in the traditional Japanese style called “mai” the other type of geisha is called “jikata” the second type usually sings or plays musical instruments. Tachikata are the “maiko” (young geisha) while jikata are the experienced geisha artisans. The maiko could be thought of as “an apprentice” to the more experienced geisha. The geishas lived in city districts known as “hanamachi.” Two of the most famous hanamachi (in the past and today) are located in Tokyo and Kyoto. Some hanamachi developed near temples and shrines. Near these were sometimes “ochava” or tea houses where prospective business clients would frequently visit. However, the Japanese ochava is different from an ordinary tea house which merely serves tea.

In reality, ochava were banquet houses. Such houses would rent rooms for whole dinner parties at which geisha could entertain many customers at a time. Since the geisha was trained strictly in high culture, and the Japanese arts, she possessed many valuable skills. She was expexted to be proficient in the refined abilities of Japanese dancing, singing, and playing musical instruments. It was assumed that she could arrange flowers, wear very beautiful kimonos, hold tea ceremonies, write calligraphy, and engage freely in formal conversations and Japanese etiquette. These highly developed abilities no doubt added greatly to the idea that a geisha was the essence of feminine beauty and refined culture in Japan.

Almost as a matter of unwritten law in Japanese society, the geisha could not marry. Most of the male clients of the geisha were already married to a traditional Japanese wife which had been chosen for this man by his parents. For this reason, the geisha was not perceived as a “threat” to the institution of marriage in old Japan.

Despite All these facts, the negative connotation even today of the geisha is that she was also a prostitute. This idea has grown out of the fact that geishas usually entertained male customers who usually had ample monetary resources to secure the business loyalty of a particular ochava. Some of the hanamachi were also located physically close to the pleasure district of the city. It should be noted that not anyone could afford to hire the services of the geishas. The ochava was a “for profit business” Which accepted only certain clients. In addition, providing sex to make customers was not considered to be part of the geisha’s professional services. If this happened, it was the geisha’s personal choice but was never something demanded by her employment. Such an incident like this one would have been considered a scandal among the geisha community.

So when we observe the elegant Japanese kimono doll, its significance becomes better understood by this old story of the Japanese Geisha. The kimono, like all the articles of her trade, reflects the art and seasonal festivals of Japan. Her obi, hair, pins, face paint, and movements are all combined together into one living work of Japanese high culture, tradition, and beauty. Yes, that small but elegant kimono doll on your shelf is the essence of the geisha today, geisha still do their work but most of the negative associations of the past are gone. Few Japanese women aspired to be geishas any longer since the demand and profit are limited. Plus, the hard training is often considered too difficult for the reward provided later. Ironically, the geisha often learns computer skills or English conversation to be more at ease with English – speaking customers who visit Japan. Even so, the timeless beauty and elegance of the Japanese kimono doll continues to allure us. It is not hard to understand why knowing all the facts!