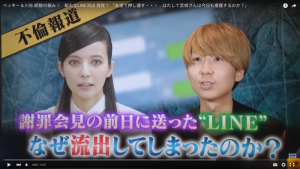 Becky is a very popular Japanese TV personality. She is half Japanese and half English. She has a number of variety TV shows and has contracts with quite a few TV commercials.

When Japanese people think of Becky, they often associate her with the girl next door type. You want to be her friend. She is pretty, down-to-earth and funny.

We hardly ever heard any gossip about her love life.

But now she is about to lose her career. At this moment, her career is kind of doomed. So what happened to Becky?

Tabloid media reported that she was having an affair with Enon Kawatani, a 27-year-old vocalist in the popular band Gesu no Kiwami Otome. This took Japanese people by surprise.

Probably that would be most people’s reaction. Details of her extramarital affair have been widely reported during the daytime talk shows, Ouch..Becky had to announce that she was taking a break from being a TV personality.

It is reported that up to ten commercial sponsors are planning on canceling their contracts with Becky due to this scandal. It’s quite harsh, isn’t it? It is because people have certain expectations about Becky and she got these contracts because of her character.

Becky is said to have appeared in more TV commercials than any other tarento (TV personality) in Japan. So how is this scandal affecting the married man? Not much. He will go on with his life and will be promoting his new album.

Becky apologized to the public, her fans but her attempt to reverse her damaged reputation failed miserably. She was denying the allegation that she was seeing a married man, but Tabloid recently leaked her conversations with this married men that took place on a popular social media app, LINE.

Japan’s entertainment business is pretty hard and the collective mentality does apply to celebrities. SMAP recently suffered the scandal, and they had to bow and apologize deeply to their agency and fans on TV. People really hard for foreigners to understand why this is such a huge deal.

Becky’s public image as a pure, funny, down-to-earth girl is ruined and she will probably not be able to return to her career for a long time. It is really sad and we don’t really know what happened.

Maybe this guy kept telling her that he would divorce or the marriage was practically over. But it seems like Becky is judged harshly with her doomed career.

Her agency announced that Becky has been suffering from insomnia and depression and will not be able to work for a long time.