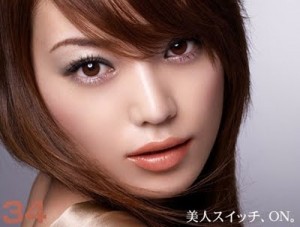 I was talking to my American male friends recently and all of them were kind of hinting that I was not like most of the Japanese women they know..I don’t know what they were trying to say but I guess they were probably saying that I was far from stereotypical Japanese women. Oh well, it’s too bad because it might be a negative thing. I am not very domesticated and I would be very happy to break the western notions of Japanese women..and I am not the only but I know some of my Japanese female friends who are like me..Probably American mothers in law wouldn’t like me either and they would be concerned if their sons choose to have someone like me as their wife. Oh well..so anyways I wanted to write about the typical stereotypes of Japanese women. A lot of Asian men (Chinese, Koreans, and from other South East Asian countries) often tend to have these stereotypes..These two are the major stereotypes many foreign men tend to associate with Japanese women. I hate to break their fantasy but not every Japanese woman you are going to meet is going to be like this perfect submissive beautiful Japanese woman.

I do not own this picture. Her name is Ebihara Yuri, Japanese model. I think she is the most beautiful non-mixed Japanese model (there are too many hybrid beautiful models in Japanese fashion) and of course we would love to think that she is one of those submissive stereotypical Asian women. Who knows?!

1) Japanese women are submissive-hum..this is not what I know but maybe historically women were expected to be submissive to their father, brother and husband in Japan. In fact, my grandmother in Japan was unbelievable submissive to my grandfather who did not treat her so nicely. I remember how my grandfather would just order her to go get “chopsticks”, make dinner, clean..she was like a domestic servant. I think this was more common back then but none of my Japanese girlfriends would tolerate this and many of them enjoy cooking, cleaning and taking initiatives to do stuff around their home but not to the extent, the women of my grandmother’s generation would have been willing to do for their men..Japanese women today may act submissive but a lot of them control their households. For instance, Japanese wives do handle their husband’s hard-earned money. My dad receives a small amount of “okozukai” (allowance) each month and he does have to ask my mom for permission to get extra money to sign up for a hiking trip..for instance. lol It’s very sad but my mom is the dominant one in my home, and it’s the same for all of my Japanese girlfriends..but there are very submissive Japanese women who enjoy serving their men. I just want to straighten things out since many western men still expect women in Japan to be very submissive..and not all of them are like that.

2) Japanese women do all the housework.- Well, this really depends on the situation..I mean if their husbands are the sole breadwinner then they should do the housework, I believe. The notion that American men are willing to split the house chores comes from the fact that many married couples in America work full-time..then they are going to have to come up with sustainable plans to raise kids and to do the domestic works to support each other. So it is more common to hire a babysitter or a house keeper who can help working parents keep their careers. And from what I understand after living in America for many years..women tend to do much more chores than men regardless of their careers. My American friend has worked a higher paying full-time job as a manager but she had to do all the household chores, cooking, cleaning, picking up children..and play with them. Some women manage to split the chores in between but my experience is that women tend to do more either in Japan or in America..unfortunately I am a very lazy person and since I am fairly career oriented, I am not willing to do what my friend does..it is just unhealthy and it is not in my nature to bust my butt in every area. I don’t really cook, clean..now that I have my own place with a little conure, I have no choice to clean her cage and clean the mess she makes everyday.. lol Once I have my own child, I should be willing to do more cooking because it’s healthier and more economical.

3) Japanese women are not independent-I don’t know where people get this idea from but my guess is that this stereotype is tied to the fact that Japanese women tend to resign from their full-time job once they get married and have children. It is just not possible to work for Japanese companies while raising more than one child. But I do know Japanese women who continue to hold their professional jobs but these are usually non-corporate jobs..more and more Japanese women are willing to give up on getting married and having a child to prioritize their career advancement. I can say that I am one of them. I just do not see myself quitting my current job in school to raise more than one child. I don’t mind having one child..even then I understand the consequences and my priority will shift to raising a child. I prefer to earn my own money and take care of my own bills..of course it would be nice to have a rich husband to pay for all the bills..I guess I don’t mind that now but even then, I would like to continue doing something meaningful in life and earning some money is very important to me. Many Japanese women whom I know feel the same way so this stereotype is inaccurate.

I hope I did not disappoint my readers for being honest about Japanese women. At the same time I want to emphasize that there are many domesticated western women that I personally know here in California..so these are nothing more than stereotypes and I do not want to be biased but women tend to be the care taker especially once they have the first child..and but it is true that Japanese women are expected to cook, clean and take care of their husband because of its tradition and history. I embrace these elements and it makes us more attractive. ^_^ I would love to hear your experiences with Japanese women or if you simply want to comment, please feel free to do so.