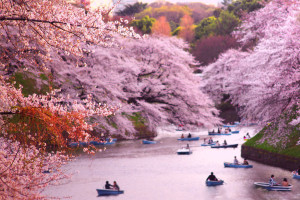 Japan has fascinated and perplexed westerners for centuries. It is a country of dichotomies; strikingly modern, yet under the surface, remains conservative and traditional.

Japanese gardens, Geisha, and Kabuki are famous images of Japanese culture, but are not things that enter into most people’s daily lives. But, daily life in Japan can be much more interesting and hold many more mysteries for visitors.

For foreigners living abroad or expatriates (expats), life in Japan is exciting, frustrating, confusing, anything but boring. Here are some aspects that make daily here so interesting.

In Japan, space is limited. Apartments and houses are generally much smaller than what foreigner are used to. creature comforts are not the same. It’s been said that living in Japan is like camping. Most people sleep on futons on the floor, through many have beds.

Homes and apartments do not have central hearing and air conditioning, but rather, each room has a heater/air conditioner unit. They only heat or cool the room they are in. Domestic lighting tends to be fluorescent. It’s brighter, but seems artificial than incandescent lighting.

Japan is a great place to raise a family, not only because it is relatively safe, but for the government support. Japan has national health care which basically pays 70% of medical fees. Medical care for children is basically free with parents only paying a small consultation fee of about $5 and all medications are free until junior high school age.

In addition, all children receive about $50 a month from the government. This is to help with the cost of raising a family. There is also legislation on the way that would increase this.

All of these benefits are for people living in Japan regardless of whether you are a foreigner or if you have residence status.

Japanese cuisine is famous for being healthy and Japanese use a lot of fresh vegetables in cooking. One thing that strikes foreign visitors is the variety and color of food at meals. Western meals tend to be made of large servings of two or three dishes, meat and potatoes, but traditional Japanese meals are made of up of many smaller dishes including rice, fish, vegetables, pickles, and soup.

Typical foods include rice dishes, noodles, hot spot dishes and of sushi and raw fish. Seasonings tend to be lighter than in the west and Japanese appreciate the natural taste of foods.

Japanese sweets often seem bland to foreigners. However, the number one complaint from foreigners is not the taste. But the price and service size. At a restaurant, for the same price you would get a much larger meal in the west. But buffet style or “baiking” restaurants are common. And many kinds of western food are also popular.

Japanese food is varied enough to suit every taste. You may not like everything, but you’ll never run out of new things to try.

Japan has a rich tradition of special days. In addition to official national holidays like Children’s Day, Respect the aged day and Sea day, there are many other special observances with specific customs or foods associated with them.

Setsubun in February is a day to throw beans at devils and bring good luck. On Seven Grasses Day, people eat a rice porridge made with seven traditional spring herbs. There is a day in December to take a bath with yuzu, a kind of citrus fruit to ward off colds. Eel day is in July and people eat eel for stamina during the hot summer days. And of course every city in Japan has its own summer festival, full of dance, music, food, and fireworks. Summer festivals are one of the best things about life in Japan and shouldn’t be missed.

One of the most difficult things to understand about Japan is how Japanese people interact. In the west, e use expressions like, “What’s the bottom line?”, or “Get to the point.”, this does not apply to Japan. Japanese generally do not state things directly. This is exemplified in the language itself where subject markers and pronouns are often omitted. This is also true in writing and meaning is often implied. This can often leave foreigners confused, especially in a work environment.

Unlike the west, where we are encouraged and often required to state our opinions out loud, in Japan, “Silence is golden.” And meanings are often filled with silent “thinking time.” Foreigners may find they are the loudest ones at meetings or on trains. This does not mean that japanese are not paying attention, however. They think deeply about something before speaking and offer full-fledged ideas and don’t feel the need to fill the air with necessary chit-chat.

Also, Japanese are extremely polite and this expressed in the Japanese bow. In any social interaction, Japanese must always think of others first. Japanese often engage in reciprocal gift-giving. This is not just being friendly, but to cement relationships in the community and in business.

Expat life in Japan can be exciting and frustrating. You can live here a lifetime and not understand everything. There will be new insights and discoveries everyday.

To learn more, there is a great new blog, Life in Japan with Jason.

It’s written by an American whose been living with his Japanese family in Tottori prefecture, Japan for over ten ears. It has numerous insightful articles, especially on Japanese culture and holidays. In addition, there are ongoing series on topics such as “what’s this?” about strange Japanese objects, Japanese flowers, gestures, food, raising a family and more.

Check out this interesting blog about expat life in Japan, today.

Jason Winter is an English teacher and content writer living in Japan. He writes on a variety of topics. Besides his blog, you can read his other articles at Hubpages, http://samuraijack.hubpages.com/