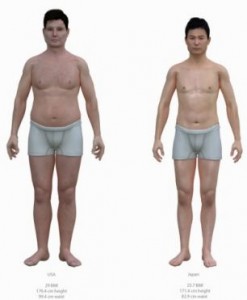 Ok..I am Japanese and want to ask them this question. I think I already know the answer to this question though. Japanese people are known for their longevity and health. You rarely meet overweight or “fat” Japanese people. The image on the left shows the average U.S. and Japanese men. You see the difference. Foreigners who know little about Japan may think that they live off of miso soup and fish. You would be surprised to see lots and lots of fastfood restaurants everywhere in Japan. The examples are KFC and McDonald’s and the list goes on and on..It is said that there are over 3,000 McDonald’s in Japan which is second in number to America.There is a countless number of Convenience stores such as Seven Eleven, AMPM, Lawson etc. You can get anything that you need including bento, onigiri (rice balls), junk food and snack in Japanese Convenience stores. Japan has an incredibly rich food culture..BUT WHERE ARE THE FAT JAPANESE PEOPLE? Well, you may find overweight people here and there, but definitely not as frequently as you would see in America..So I came up with the following reasons which explain why they are so skinny. I am from Japan, however, I am referring to my own people as “they” since unfortunately I am a minority group..Well, I am on Medifast and have been working on it. So who knows? I may be the average Japanese woman (120lbs)soon. Well, let’s hope so.