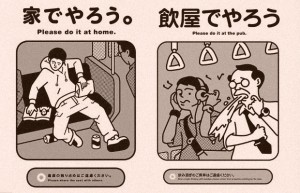 You might have seen the images or videos of extremely packed Japanese train. It is quite shocking for foreign visitors. Trains get very crowded especially during morning and evening rush hours in the big cities. Japan has an efficient public transportation, so it is not uncommon for people to take a one-hour train ride to go to school or work.  During rush hours, you want to avoid taking trains if possible. they are packed to the point where you can’t even move. You are extremely lucky if you find a seat. People are often literally squeezed into a train. Some people just want to wait for the next train to come . It is quite shocking to foreign visitors.

There are basic etiquette you are expected to follow on trains in Japan. It is a common sense but priority seats （優先席）should be given to elderly and disabled people. Of course you are not allowed to smoke in these local trains. Japan has high-speed rail system called Shin-kan-sen (新幹線), which people take to travel long-distance.  They have smoking carriages (smoking zones).There are many common rules you are expected to follow, and one of the rules foreign tourists might not be aware of is the etiquette associated with cellular phones. They even have signs for it inside the trains, but you are expected to not answer or make phone calls on the train. If everyone started to answer phone calls, it would be annoying. But talking on cell phone on the train is a bad manner, and you would be frowned upon if you talk on the train in Japan. You also have to be careful when listening to music with headphones or earphones in Japanese trains. Music can leak and it is considered a nuisance. So be sure to keep your music low. So you see passengers who are texting incessantly on the train in Japan.