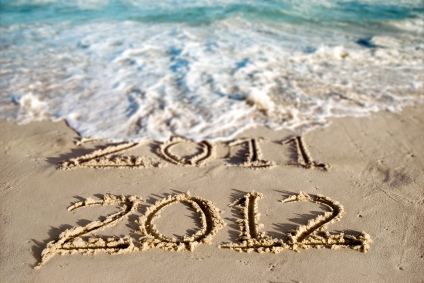 Happy New Year! Shougatsu(正月）is a Japanese word for new year, and it is considered to be the most important season in Japan. According to wikipedia, the Japanese New Year used to be based on the Chinese lunar calendar prior to the Meiji Period. In 1873, “Japan adopted the Gregorian calendar”.

Japanese people eat Osechi-ryouri during the New Year celebration. Another important thing to remember in the end of December is that Japanese people send out postcards to their relatives,friends,co-workers,customers etc. These postcards are called “nengajyou”(年賀状）(New Year’s Day postcards). It is similar to the Western custom of exchanging Christmas cards. We should send out Nengajyou so that these postcards are delivered on January 1st. So we have to take them to the post office during specific period of December. I remember that my friends worked at the post office as part-time workers to help sort out the postcards and deliver them.

houfu (抱負）means “hopes, aspirations, plans, resolutions”. What is your new year’s resolutions? anta no shinnen no houfu wa nan desuka? あなたの新年の抱負は、何ですか？ I hope that your last year’s “houfu” was achieved. It is good to set realistic achievable goals so we have some sort of purpose. 🙂 If your new year’s resolution is to become fluent in Japanese language, breaking this goal into smaller plans would be good. Also try to define what “fluency” mean to you?