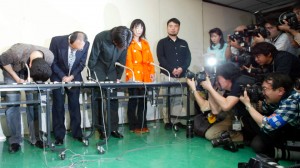 I used to apologize frequently even after I had moved to America..and I still do. But shortly after I moved to Los Angeles, I realized that I had to be very careful with apologies..I grew up in a culture which values the virtue of apologies but then it is a little different in America and it was VERY different in Los Angeles. I’ve seen some Japanese people who were taken advantaged of for apologizing at the accident scenes..well, I guess it is a common sense but it’s just part of our culture to be polite so even if the accident was not our fault, we are still urged to apologize..like “sumimasen” in Japanese.

But well this could happen in Japan too but America is a lawsuit’s culture..and Los Angeles is probably one of the worst places in terms of lawsuits..so Japanese people were often taken advantaged of for apologizing and being polite. But again it can happen to foreigners in Tokyo..bad people are everywhere! 🙁

Japanese people tend to apologize far more easily compared to American people. Even if it’s not their fault, they tend to just apologize to avoid the conflict. And if you are apologizing sincerely, you are expected to bow deeply..and this is why employees at a clothing chain store (“shimamura”) did “dogeza” (apologizing on their knees) to show an extreme form of apology. I have no idea what kind of damage their store caused to this evil customer who later posted the picture of two staff employees apologizing. But it is not normal even in Japan. I will not do dogeza for ANYBODY and I don’t mind losing such a job actually. I guess I just have too much pride. lol