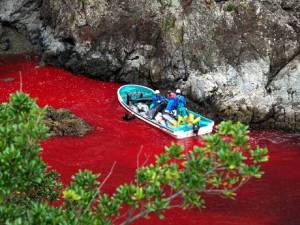 I decided to use my landing Home page to join the campaign against Japanese dolphin hunters. I had to do something since most Japanese people are unaware of this horrific practice. Japanese government has continued to allow this slaughter because the dolphin hunt is a traditional fishing culture. Maybe people used to do this DECADES ago when they didn’t have anything else to eat but it doesn’t make it ok to kill innocent animals. Unfortunately they will continue to do this as long as there is a huge demand for captive dolphins. As long as we continue to go to places like Sea World, we are supporting the slaughter in the Taiji Cove and other places that do the same thing to generate profits. It is all about money. It is true that Japanese government is trying to protect the fishermen, who rely on this annual dolphin hunting to make a living. They are legally allowed to do this in Japan and they kill dolphins under strict regulations..and I am puzzled. Why do they need to be killed? Because Japanese people eat dolphins.

Japanese people love dolphins. We love animals and do not support this horrific practice. They don’t even eat dolphins. It is ridiculous. I have never seen dolphin meat sold in the stores in Japan but have seen many “whale” meat. Dolphins are cheaper than whales so they are probably selling the dolphin meat by deceiving the citizens in Japan. Also we do not eat Whales. It is not common anymore and people do not eat whale and especially..dolphins. Dolphins are beautiful, fun, friendly..and very intelligent. Some Japanese people argue that they should not be attacked because other countries hunt animals and we kill cows brutally. Still it doesn’t make it ok. Just because other countries practice killing, it doesn’t mean that we can continue to do it and this practice and the heavy media coverage in America is bringing shame on Japanese people who know nothing about this.

I did not know anything about this until I moved to America. The Japanese media does not cover this and this dolphin hunting is done very secretively. If this is part of the Japanese culture, why do they need to keep this from the media? Yoshinobu Nisaka, the governor of Wakayama prefecture where this horrific killing takes place says: “Dietary culture varies and it is the wisdom of civilization to mutually respect other standpoints unless the world faces a lack of resources,”

Let me be clear: Japanese people do NOT eat dolphins so their defense does not justify what they do.