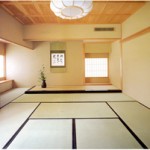 Tatami mats are traditional Japanese floor. One of the rooms of my house has Tatami floor covering, and we call it “Tatami no heya”. Tatami floors are made of woven soft rush straw and packed with rice straw traditionally. Tatami’s length is usually twice the the width.

I was not aware of this, but the term “tatami” came from the verb “tatamu”. Tatamu means to fold or pile. Traditionally tatami were considered luxurious for the nobility. Tatami were used only for the highest aristocrats, while the poor used mat covered dirt floors. Emperor Shoumu used tatami as a bed in the Nara period from 710-794. And this was the beginning of the tatami history in Japan. People in different social ranks used different types of tatami. It is said that Tatami did not become common among the common people until the end of the 17th century.

Modern Japanese homes do not usually have many tatami-floored rooms. Rooms with tatami flooring is called “washitsu”, meaning Japanese style rooms. Recently we have more western-style houses than Japanese-style houses. Tatami has distinct smell, and it has a cooling effect during the summer.

In Japan, the number of tatami mats explains the size of a room. Japanese people sit on zabuton (cushion) which is placed directly on the floor. The tatami represents simplicity which Japanese society values traditionally.