Haruma played the main character who suffered from ALS, a progressive degenerative disease. He is known for his complete dedication to his each film. For this film, he did lose lots of weight through diet alone instead of exercising. He didn’t want to build any muscle for this role. This movie taught us about human resilience and no matter what happens, we can persist and find the meaning of our life.

Haruma appeared in various popular TV shows including Gokusen, Galileo, Samurai High school and many more. He also played as Eren Jaeger on Attack on Titan movie series and appeared in other Japanese films. Haruma was known to be extremely diligent and hardworking and he gives 120% to everything. When he played a role in Chinese film, his role didn’t require him to be fluent in Chinese, but he practiced and studies so hard with his Chinese language instructor. She was impressed with Haruma’s progress.

He also played the important roles in musicals, in one of which, he played a drag queen named “Laura” and he was trying to get used to walk in 12 cm high heeled shoes even at home so that he would be able to get comfortable on stage.

He was in the middle of filing a new Japanese TV series (“love will begin when money end”) and was supposed to work the next day. Haruma didn’t show up at work, so his concerned manager went to his apartment to find his body in a closet on 7/18.

Every person who has been interviewed regarding Haruma has nothing but nice things to say about him. There were some SNSs that reported his uncool sweatshirt he wore when he was out in public, but who cares what he wears privately?

Maybe he was doing that to disguise in public..

“perfect, humble, kind-hearted, polite, intelligent, athletic..” There are so many positive adjectives that would describe him as the first class actor in Japan. He started his acting career when he was only 6 or 7 in Japan. He basically has lived in the Japanese entertainment industry his whole life.

This tragic news literally shocked the entire nation, because Haruma Miura is such a well liked actor and nobody reported any changes in Haruma’s behaviors.

In fact, four days ago, Haruma posted a photo of himself smiling at his drama set. 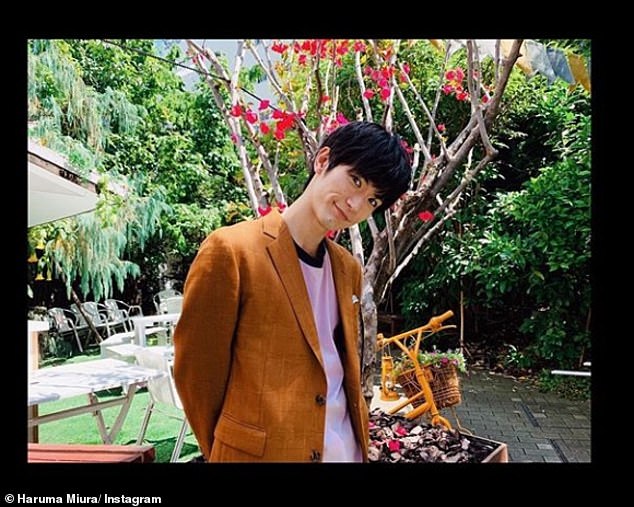 The police found a death note which was not released at this time and the media reported that Haruma had died of apparent suicide.

A lot of people are wondering what drove him to take his own life..he seemed to have everything going well for him. His career was at his peak and things were going well. He was only 30 years old. He had this “perfect” image, but we would never know his internal struggles, having worked in strict Japanese entertainment industry his entire life.

What we know is that he had been suffering and that this was the choice he made to escape the enormous pressure and emotional pain. We don’t even know that is what really happened. He could have resorted to impulsive behavior under the influence. It has not been confirmed, but his close friends have reported that Haruma enjoyed drinking even while alone.

This is why Japanese media never introduced national suicide prevention hotline number while reporting Haruma’s untimely death and suicide….and they focus on the cause..”Haruma must have had troubles which drove him to the edge.”

“It is unlike him. He was so responsible and knew that this would cause so much inconveniences to his team.”

When you suffer from disease, it does not matter how responsible you are..what your code of ethics say. Untreated mental health conditions can take over your life literally. I truly hope that Japanese media stops focusing on some kind of external causes.

Maybe something has happened to him. We would never know. People who knew him well, even these people are just speculating. Only Haruma knows what happened. But obviously, something was going on and the disease killed him.

Many fans are leaving messages on Haruma Miura’s instagram page…asking “Why?” It is normal for us to want to find the answers. But we must be ok with not knowing what exactly drove him to suicide. One thing that is certain is that he suffered from depression or other mental health conditions that were not treated properly. If he was getting professional treatment behind the scene, the clinic staff should be investigated properly.

It is heartbreaking to imagine the kind of emotional suffering he had endured all these years and he was always putting other peoples, fans before his needs. That must had been exhausting.

Many people suffer from suicidal ideations and in fact, some sources say that up to 99 percent of us have thought about death or suicide..but there is a huge distinction between passive suicide ideation and active suicide ideation with means and intent. Some people order supplies, research how to execute it…and subconsciously, they move into active suicidal phase which requires “immediate” attention.

I have experienced my own share of struggles and have thought about suicide many times. I had to just accept how I felt and got the help that I needed. I had the luxury of seeking professional help and there are many people who can’t seek help due to financial reasons, stigma and for Haruma Miura, I can imagine that it would be difficult for someone that famous to seek help in Japan.

I do not want to say “Rest In Peace” to Haruma Miura..because that’s what everybody has been saying…but Japan has very high suicide rates historically and shaming and bullying on SNS did kill another young female celebrity in Japan recently. Obviously, she must have had existing mental health conditions, but in Japan, shame is often used as a social sanction and it is extremely painful. Now we can do that online anonymously. But I again don’t believe that that was the direct cause of Haruma’s suicide and death.

Haruma Miura has inspired so many people throughout his life, but I wonder if he has ever felt at peace or comfortable in his own skin…like has he ever felt that he was “enough.”? Obviously, he is an overachiever but he may not have given himself enough credit for all he has accomplished in his life time…when you know that you are enough and that you have a life that’s worth living despite emotional suffering, you can get through almost anything. But for that, it requires professional help…I mean, talking to a family member and friends is a start but it requires more if you actually have clinical depression or other mental health conditions.

I still don’t have words that can sum up my feelings and gratitude for Haruma Miura and his enormous talent. I really hope that he is free from enormous pressure and emotional suffering on the other side. Hie legacy and spirit will continue to live with us and he is Japan’s pride..

Resources for suicide prevention in Japan:

If you are having suicidal thoughts, help is available.

PS: On the other note, there are many articles that talk about Haruma being murdered. The closet in his apartment in Minato district, Tokyo is very small and according to the source, it appeared as if Haruma had a guest and he had slippers on. What makes the matter suspicious is that he was checking instagram until then and around that time, hie phone record indicates that he was “active” on instagram.

Again, this is just a report and we really don’t know what happened. If it was a murder, police must have been investigating and if Haruma took his own life, only he knows why he did for he did. He will be terribly missed by everyone.