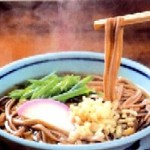 We eat Toshikoshi Soba on New Year’s Eve with our family in Japan. New Year’s Day is still the biggest holiday in Japan, and it is our tradition to celebrate quietly with family at home. We used to watch year-ending TV programs such as Kohaku Utagassen and Record Taisho with my family and reflect on the old year. My mother used to make hot soba noodles called “toshikoshi soba”) which is actually a tradition in Japan. We eat Toshikoshi Soba at around midnight of Oh-Misoka (December 31st) while listening to the striking bell at the temple. We have to eat Toshikoshi Soba to finish up the old year and look forward to a good new year. I am not quite certain why it is Soba and not Udon or other Japanese food,but Soba is considered to be a simply of fortune according to some sources. Japanese people stay up very late to eat Toshikoshi Soba with family members on December 31st and they usually go to temples/shrines on January 1st.

January 1st is a very special day and some people want to view the new year’s first sunrise, which is called Hatsu Hinode in Japanese. Soba restaurants are usually very busy around this time. I haven’t practiced this very important tradition for over 6 years now.