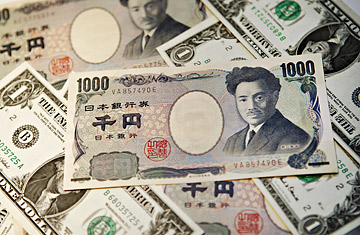 The yen strengthened on Tuesday as traders dialed back bets against it after the Bank of Japan held off on additional easing and Governor Haruhiko Kuroda offered little indication more stimulus was likely in the short term. Many investors have been selling the yen in anticipation a sales tax hike that took effect in Japan at the start of April will hurt consumption and the BoJ may have to ease policy in coming months to soften the blow. The dollar fell 0.8 percent to a 10-day low of 102.23 yen while the euro shed 0.5 percent to 141.01 yen, the lowest in more than a week. (read more on reuters.com)

Foreign investors leave Japan Debt Market
Investors overseas sold a net Y2.5 trillion of Japanese debt for the fiscal year ended in March-the first net selling in four years. That’s essentially the message from overseas investors, who sold a net Y351 billion ($3.4 billion) of Japanese government bonds and other types of debt in March. Amid signs of an economic recovery, inflation appears to be returning to Japan, as the BOJ desires-something that would erode principal and interest payments on bonds-(read more on blogs.wsj.com)

Japan’s economy, enduring a two-decade slump, received a jolt last year from “Abenomics” That is the name for policies pushed by Prime Minister Shinzo Abe to try to spur inflation and generate growth by getting consumers and businesses to spend now, no later. But Japan’s efforts to invigorate the economy through government spending have strained its finances. The government’s debt is twice the size of Japan’s economy. To reduce the debt, the government has raised the country’s sales tax from 5 percent to 8 percent. (read more on toledoblade.com)

Japan’s economic growth has been stagnant and although Prime Minister Abe has implemented new policies including Tax Hike, I do not know whether the country to restore its economy to what it used to be. Because of sharp decline in Japanese population and baby boomers are getting ready to retire, would it be possible for Japan to survive the decade long slump?