My father is a Japanese salaryman and is about to retire.

He has worked for the same company for over 40 years.

That is a very long time.

He didn’t hold the same job, as he has moved up the ladder in the same company. He has had technical jobs, sales jobs and finally became a manager who oversees the operation of the company division.

Growing up in Japan, I had never questioned my father’s constant exhaustion and his coworkers’  bizarre behaviors. I know for sure that Some of the following behaviors would get you fired from American companies.

So let’s go over some of the “bizarre” behaviors of Japanese salarymen.

1) Sleeping in the office.

Japanese companies value hard work and loyalty. Japanese employees often work after 5pm and it is not uncommon for them to come home before or after midnight.

It is pretty horrific when you think about that. Japanese society does appreciate hard work and my father used to tell me his coworkers were falling asleep in the office. Some of them were not even sleepy but were showing how hard they were working for the company and that made them look exhausted during work hours..That’s a sign of hard work and loyalty.

2) Long hours of work and a lot of socializing after hours. 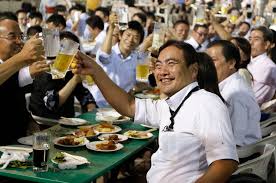 My dad used to leave home at 7:30am and came home at 5pm. We were happy because we usually didn’t see them during the week. Then he goes, “I am going to “nomikai”” (happy hours type of deal..) and he took shower, wore a tie and suit and left. My non-Japanese mother was often very upset about that but he enjoyed this daily nomikai and spent a lot of time with his fellow coworkers and bosses. In fact, this is fairly typical in Japanese corporate culture. Your work comes before your family! 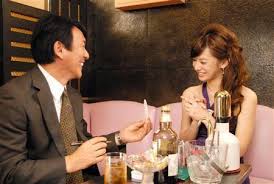 My mother was not happy about this because my father’s client often took him and his colleagues to hostess bars.

In hostess bars, young beautiful hostesses serve drinks and flirt with men. It was part of Japanese corporate culture back then. My father made a mistake one time and gave his cellular phone number to a hostess. Of course, it is their job to bring these guys back to drink with them so she started to call him. My mother found out about it and took his cellular phone away…. 😳