Two chefs have pleaded guilty Monday to serving meat from federally-protected sei whales. Kiyoshiro Yamamoto, 49, of Culver City, and Susumu Ueda, 40, of Lawndale, who worked at now-closed The Hump at Santa Monica Airport, pleaded guilty to three misdemeanor charges each-conspiracy and offering to, and selling, a marine mammal product for an unauthorized purchase. They each face up to three years in federal prison, plus fines and community service. The chefs and Typhoon Restaurant Inc.., parent company of The Hump, were initially charged in 2010, but the charges were dropped and later refiled and revised last month. According to court documents, Yamamoto and Ueda purchased the meat from Gardena-based seafood dealer Ginichi Ohira, who procured it from a supplier in Japan..(read more on losangeles.cbslocal.com)

It is illegal to sell and SERVE any kind of whale meat in America. Sei whales which the restaurant was serving are protected under the Marine Mammal Protection Act of 1972. They are endangered! I am truly embarrassed about few Japanese who continue to violate the international law.

Two sushi chefs were involved in importing whale meat illegally from japan and the meat was served in the restaurant. Two Sushi Chefs who pled guilty to three misdemeanor charges of which they agreed to take in exchange of releasing information about the owners of the restaurant who were responsible for importing the whale meat from Japan. This incident happened in 2010. In the U.S., it is illegal to buy whale meat based on the federal Marine Mammal Protection Act. They were serving Sei whales which are protected as endangered species. According to the legal documents, two Sushi chefs purchased approximately 11 pounds of whale meat from a local seafood dealer and the meat was labeled as red meat, fatty tuna. The Hump restaurant, which closed its business in 2010, served whale meat off-menu per request. What is so disgusting about the restaurant is that they were also serving turtle blood squeezed fresh from live turtles.. Who would want to drink that? That is so disgusting!

A Japanese parliamentary committee has unanimously passed a resolution urging the government to investigate all options to continue whaling, including “walking out of the international whaling convention”. The 40-strong fisheries committee, made up of a cross-section of members of the lower house, demanded on Wednesday the government redesign its “research” whaling programme to circumvent an international court ruling that described the programme as a commercial hunt dressed up as science. The panel demanded the government find a way to continue the research operation so as to play a responsible role as the only country in the world with a scientific approach, according to AFP news agency. (read more on aljazeera.com)

Rakuten ordered their retailers that they will no longer allow the sales of whale meat on their website. This is one of the retailer thanking their customers and also they will be closing the online store on rakutan but they will somehow continue the business. (http://www.rakuten.co.jp/glenbarra/) 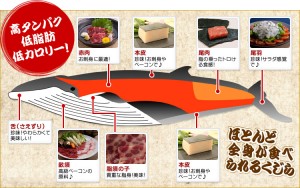