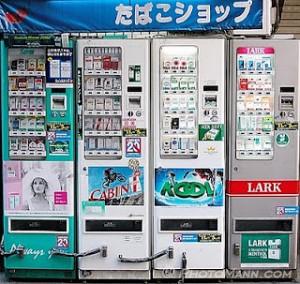 When you visit Japan, you will notice so many vending machines selling snacks, beers, liquors, soda, tea..and even tobacco! I have been away from Japan for so long, but today we can’t get tobacco from vendine machines without an ID. Back then this was sort of a controversial issue and there was a traditional sense of community responsibility/control in Japanese society. Neighbors were watching out for teenagers trying to get alcohol or cigarettes but time has changed and it wasn’t working well anyore. Jidou hanbaiki is the Japanese word for vending machine, and jidou means automatic in Japanese, hanbai means “sales” and ki is “machine”. I went back to Japan with my American friend in 2004, and I remember that she was surprised to see that we had so many vending machines selling alcohol and tobacco.

According to wikipedia, Japan has the highest number of vending machines per capita, with about one machine for every 23 people. Wow! That is a lot. I personally love vending machines because they were everywhere in Japanese cities and very convenient. I could get a soda or tea on my way to my friend’s home riding a bicycle in summer. 🙂

What makes so interesting is that I haven’t seen outside vending machines in California..I usually see them indoor in the building. It is probably because of the security reason. Japan is a relatively safe country so that vending machines could be placed outside and still Japan’s vending machine industry generated huge profits. In Japan, they even have “lottery” system. While buying your drink and win, an electric roulette starts and then if you win, you get another one for free! Now if you want to get cigarette from vending machines in Japan, you must have an ID. Now cigarette vending machines are plastered with the bright yellow notices mandating buyers have an appropriate ID showing that they are at least 20 years old.
Jidou hanbaiki-自動販売機（じどうはんばいき）

*Yumitolesson.com is a web-based Japanese language school. We are based in California. We offer online Japanese language lessons for all levels of learners. We have worked with students who live in Los Angeles, New York, Seattle, San Francisco, Dallas, Chicago etc.